What happened to Adam? (Adam x)

Sorry for the blast to the past (see this thread for reference http://www.30bananasaday.com/forum/topics/debbster-and-adam-have-le...)

but does anyone know if Adam ever created a separate website after leaving 30bad? I appreciated his insights and knowledge so much.

Try here.  I think this is the same guy 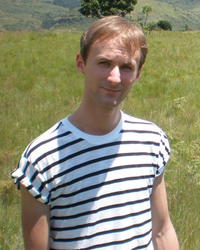 For Adam Greer, CNM Graduate in Naturopathic Nutrition, wanting to qualify in a subject he was passionate about, was something he pursued at the first opportunity.

“I had just turned 19 when I enrolled on the diploma course at CNM in Manchester. I became really interested in nutrition some years previously and was engrossed in the subject. On my 18th birthday I decided to celebrate my coming of age by abstaining from alcohol and to this day I am still tea-total. From there, I became a lot more conscious about food choices. Physically I felt really good, but beyond that it was empowering to feel in control of my overall health, so the decision to enrol on the course and qualify in a subject I loved, was a simple one.”

“There were lots of other courses, mainly online learning, that I looked at before enrolling with CNM, but I was given a very good recommendation about the college and once I learned more about the programme I was impressed. Primarily I wanted to learn in a classroom environment, engaging with others, and CNM offered this along with a flexible, part-time study programme that allowed me to manage my travel commitments easily.

“I enrolled initially for interest and a qualification, but as the course progressed I became more focused on practicing nutrition as a career. The first year of Biomedicine was vitally important, but I was on the edge of my seat waiting to start the clinical practice that is organised by the College as part of the course, over two years.”

After graduating successfully in 2008, Adam has since gone on to use his qualification as a Nutritional Therapist in a rather unique way, working with a regional drug and alcohol charity, on projects ranging from addictions recovery to youth crime and disorder. Now in the 5th year of running the Health & Wellbeing Project, originally a pilot scheme in the drug and alcohol centre, it has since been awarded funding and continues to be funded by The National Lottery Trust.

Adam’s bespoke project has been a great success and with a consistent waiting list since the start, his time for private practice has been limited, though is a key focus in the next chapter of his career.

“I am very excited and open-minded about going into business for myself. Empowering people to take control of their own health is the most important and exciting part of what I do. Rather than focusing on short term solutions I believe in working with people more broadly and ultimately encouraging and educating them to become their own health practitioner.”

To contact Adam directly for a consultation you can email him on adam@adamfoundeden.com