Seems like a great site to me, but is being criticized by people like David Gorski at sciencebasedmedicine. I think Gorski is wrong, but the material is too advanced for me. How can I make a rebuttal against something that is arcane to me?

I'll make a start, hopefully somebody else can finish. First Gorski is disrespectful and doesn't give people who are anti-vaccine the benefit of the doubt. Even if I agreed with him, which I don't, I don't think I would listen due to his condescending and bias tone.

The author openly calls another blogger ignorant. Insulting your enemy in a debate is a poor tactic and a waste of words. The only positive spin I can find is at least the author is openly bias as opposed to hiding his bias. Another positive is in the comments, letting Th1Th2 comment.

If you look at the rest of the site you will also find Harriet Hall agreeing with Denise Minger about the China Study. Can someone help me make sense of these graphs and figure out who's right and why?

I couldn't get vaccines out of my mind. I was looking at the amount of hate the anti-vaccine movement has triggered as opposed to say people who refuse chemo therapy. Anyways I got the idea to just look up anti-vaccine. Came up with two points of interest:

1. According to Wikipedia this has been a battle going on for over a hundred years. Why wasn't I told this before? Seriously, I wasn't even aware of an anti-vaccine movement until 2014 or so.

2. Scholarly peer reviewed article about how vaccines aren't safe. You wouldn't expect them to exist would you? Of course being me I was drawn to the words peer-reviewed, rolls eyes. :) Many times the anti-vaccine movement is called anti-science. Yet, it looks like science supports us. Its just for some reason these studies have been overlooked, the "memory hole" comes to mind.

I can't help make sense of the graphs but I can recommend a book!

Dissolving Illusions: Disease, Vaccines, and The Forgotten History co-authored by an M.D. (2013).  There is so much to learn!  Vaccines contain lab developed viruses totally unique from the wild counterparts.  These newly developed viruses when injected into your kid actually damage the body's ability to respond appropriately to the wild virus after being injected.  Another serous threat is the common contamination of these vaccines with other viruses and bacteria.  A friend of my friend got a third world virus after a vaccine.  None of these vaccines are ever tested for contamination of other viruses or bacteria because it would be way too expensive. 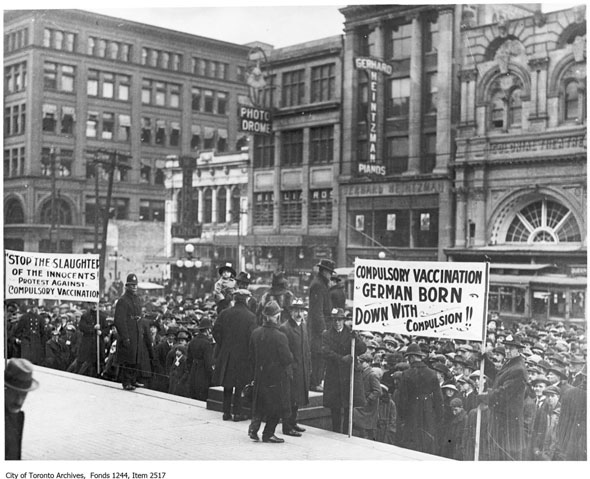 It's a rally of the Anti-Vaccination League of Canada, Old City Hall, Toronto, November 13, 1919

Take a look at how easily both bacterial and viral diseases are treated with vitamin C:http://www.seanet.com/~alexs/ascorbate/

“I see in the near future a crisis approaching that unnerves me and causes me to tremble for the safety of my country. . . . corporations have been enthroned and an era of corruption in high places will follow, and the money power of the country will endeavor to prolong its reign by working upon the prejudices of the people until all wealth is aggregated in a few hands and the Republic is destroyed.”
—U.S. President Abraham Lincoln, Nov. 21, 1864
(letter to Col. William F. Elkins)

I think a great way to fight this vaccine agenda from the conspiring global elites is to sue a city for infringement of our religious rights by imposing mandatory vaccine laws for pets.

All vaccines are tested on animals, see our religious belief here:

Beyond this, ALL vaccines, without exception, are
tested on animals in corporate pharmaceutical torture
chambers across the globe. Even those vaccines that
predate routine animal testing, and so were not tested on
animals in their development, are today so tested batch by
batch as current supplies roll off the laboratory floor.
Whatever the debatable benefits of our national childhood
immunization program may be, the moral and karmic cost in ongoing,
unrepentant, intentionally-inflicted animal suffering,
mutilation and death is mindbogglingly, exponentially
higher. From my Buddhist perspective,
immunization represents a spiritual abomination of
unimaginable proportions.

Wow, nice post ednshell. I doubt I'll sway many with animal rights. I brought up the animal cruelty issue on another board and they just mocked me. "I woke up today clucking like a chicken" was one of the responses. The predominant religion in this area is Christianity. The entire dominion over animals and belief that animals don't have souls makes animal rights a very hard sell. I watched a video recently about AR versus a Christan leader and basically the leader accused the anti fur people of being a different religion.

In short, when I state for example the nutritional quality of meat is poor because it has no fiber nor beta-carotene. The other posters say "stop hiding behind nutritional reasons your really doing this for animal rights." Then, its basically your doing animal rights for your religion, and stop trying to impose your religious beliefs on others. In other words if you make any pro vegan statement your being sneaky and making pro your religious arguments.

I think this says it all about Christianity and animal rights, warning graphic flash video automatically plays:

Here's the video I was talking about:

might explain some of the resistance to animal rights and science. If I say there is heterocyclic amines I'm just exaggerating to promote animal rights and thus my religion. Not true, but that's how others seem to take it. Really doesn't help that somehow Muslim and vegetarianism got linked. Finally, if I mention saint francis of assisi some protestants get upset/ignore the issue.

In Australia there have been talks recently that they are going to make vaccines compulsory for children and if they aren't vaccinated they won't be aloud in schools. It's all just another way that the medical industry can have control over us.

I really hope they do not make vaccinations compulsory.  It should be completely up to the individual to choose whether or not they vaccinate .

I watched five minutes of the video. The idea is really new to me. Its one statement that allopathic doctors are idiots, vaccines don't work, and in rare cases may be harmful. Its quite another that deliberate intent. I just can't take it in.

When I first came to Arnold's Way I thought Arnold was a cult leader and I came to attempt to talk some sense to him. I no longer think that now, and think he is a great guy.

In short, this will require some time, probably at least a year for me to take in, since the idea is so foreign. Some scholarly peer reviewed articles would help move my mind along. Thanks for sharing Christo.

You get to see Arnold anytime you want? :D  I have never met him but love his videos!

You must get yourself the book Dissolving Illusions, do an inter-library loan, it's in the system!

This book will take you step by step through the vaccine history right to modern day and all the  details you want.  It lets you come to your own conclusions but leaves no doubt about a conspiracy and that vaccines are medical fraud.  Twenty years of the AMA telling doctors and doctors telling their patients that smoking was good for you after they had proof that it was harmful- that was just the tip of the iceberg.

Ultimately other people believe what they want to believe. Yet, I can increase my own knowledge. I am like the anti-conspiracy theorist. To give you an idea when the two planes hit the twin towers in 911. I was the person who kept insisting it was all a coincidence.

Here's another example in the OJ Simpson trial I kept thinking OJ was innocent because nobody would commit murder.

Is a placebo more effective than chemotherapy? Yes. I just can't take the entire conspiracy theory stuff. I just always assume everyone is innocent all the time. Even after somebody lies repeatedly to me, I just assume they are telling the truth. Its the way I roll. They might be stupid, drunk, delusional, but lying nah.

I'll check out that book, Dissolving Illusions. Arnold is very busy, so if you visit don't be surprised if the phone rings and he redirects his energy towards somebody who needs the help more urgently.

I started watching. I plan to go through the video very slowly and thoroughly. First at 1:53 the person on the screen Garth Nicolson mentions increase in chronic illnesses. Here's my immediate response, how do we know these chronic illnesses aren't just caused by lifestyle choices and pollution instead of vaccines?

Never heard about mycoplasma or if I did I forgot. Claims that nobody heard of autoimmune disease, and more disease 25 years ago. Of course, a counter-argument is we have better detection methods and technology now. Same excuse they use for autism on the rise now.

Nicolson blames Big Pharm and how they stand to make billions. Here's my problem if this is true, don't the big pharm employees and family get the infections also? Most people who would hurt strangers won't hurt their-selves or family.  Never head of Borrelia before. Intracellular bacterial infections, never heard of that before either. Stopped at 10 minutes in.