Question for adherents to Natural Hygiene

As I understand it, the concept goes like this: Drugs are always bad.  Disease is a healing process.  Practice natural hygiene and you won't need all that Western medicine.

So why do wild animals suffer outbreaks of disease?  Examples in frugivores:

Here are a bunch of afflictions affecting primates:

Gorillas can get pneumonia and cancer.

Here are some killers of wild gorillas.

Gorillas and chimps have been devastated by ebola.


So what am I missing?

Replies are closed for this discussion.

Well for one thing i don't think drugs are all bad. they have their uses. Like penicillin and things of that nature. Cancer if I am right? - is found very little in nature, and a diet rich in antioxidants can cure it. - there is an excellent book on the subject.

if I have a broken arm, i will go to hospital. However, there are vitamins which can be used for restorative purposes and these are useful for mental disorders as well as physical ones - and they don't kill anyone, not like the orthodox drugs.... - high mortality rate.. (proportionately speaking)

anyway, there are natural cures which WORK! for cancer and things of that nature. This means that we don't need the expensive pharma chemicals, and that they are only there making a profit. Did you know there's a proven cure for cancer that doesn't include chemo or drugs? - and it was discovered 50 years ago! - they've hidden it because it makes no money.

Yes pharma drugs are bad. They have many effects.Rhetoric claims thery're 'side' effects

anyway good luck. I'm not going to discuss or look at this thread more, because we've both shown our viewpoints and shared informaiton so I'm done :o)

Permalink Reply by Plantivore on February 3, 2011 at 9:46am
Alrighty, Nick.  Thanks.  If you check back in, what's the cancer cure?

I've also heard of cancer being cured by administering very high amounts of vitamin c intravenously. It was on a documentary but I forget the name. But, same thing, no money in it so.... :/

is it really a wonder to you Fiona? I mean really?

If you have ever observed the workings of this world, im sure you have noticed that the economical/profit factor do have tremedious influence on how the world at large approaches problems arising in this world, most often so much that it triumphs over social concerns.

Permalink Reply by Esmée La Fleur on May 15, 2011 at 5:38am
get the video Healing Cancer from the Inside Out by Mike Anderson. It is about healing cancer with a plant-based diet. you can order it through his website www.ravediet.com

The idea that food cures cancer is a gross overstatement.  There is a ton of evidence that fruits and vegetables are protective against cancer and animal products promote it.  That's a huge reason I do what I do.  However, to simply say food cures cancer is just not true.  For one thing, cancer isn't just one disease.  It's an umbrella term for a type of disease process.  There are over 200 different cancers with different etiologies and pathologies.  The goal of proper nutrition should be to suppress the promotion stage of the cancer.  If that works, it's a therapy or treatment to manage the condition, not a cure.  There's a big difference.

The concept of using nutrition to prevent the growth of cancer should be familiar to readers of The China Study.  I don't think TCC would say you can cure all advanced cancers with raw fruits and vegetables.

Gerson Therapy is often promoted as a cancer cure.  This is a great look at that claim:

Remember, conspiracy theorists, cancer researchers and doctors lose family members to cancer as well.  If you think they are all conspiring to keep people dying, you demonstrate a very cynical view of your fellow man.

I have no doubt people have put their cancers into remission by removing cancer promoting habits and adopting the best healthy practices.  I've met a few such people.  However, none would say they were "cured."

Bogus claims of curing cancer are the territory of cranks like Vonderplanitz and Robert O. Young http://scienceblogs.com/insolence/2010/12/a_horrifying_breast_cance...

Permalink Reply by jesse james krebs on May 14, 2011 at 1:27pm
I think these animals are experiencing disease because of the bombardment of there natural habitat with all kinds of man made toxic chemicals and polutants. In NH there is no cure. There is only a choice to either  cause health or disease, through your dietary and lifestyle choices. We need to look at a hygienic approach of caring for our ailing planet, because its getting harder and harder to stay healthy when our earthly mother is trying to purge herself and detox meanwhile we keep causing more toxemia!

Permalink Reply by Plantivore on May 14, 2011 at 11:32pm
If pollution is the problem, then we all experience that, therefore natural hygiene doesn't work... Is that what you're implying?

Isn't the argument for natural hygiene that the practices are used by animals in nature, ie fasting when sick, getting sun, sleeping enough, eating natural and appropriate foods?  The idea is that you eat your natural species-specific diet, right?  How could these primates do otherwise?

Dude, that site is for one of Doug Graham's organizations.  Which would you recommend?

Dr. Graham has served on ... the board of directors of the American Natural Hygiene Society.

With dogs and insulin you are changing the subject. 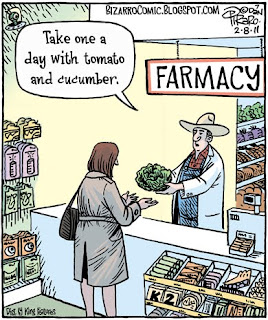 Permalink Reply by Hannah Day on May 15, 2011 at 7:44am
AHHH! i literally have this comic taped to my computer!!!! my little brother found it in the paper and cut it out and mailed it to me on valentines day :) best little bro ever <3<3

Please share this video widely. Give it a thumbs up! Thank you. Visit my websites https://www.weareinterconnected.com https://peaceful-village.com
Saturday
0 Comments 0 Likes