The Sour Sop or the fruit from the graviola tree is a miraculous natural cancer cell killer - 10,000 times stronger than Chemo. 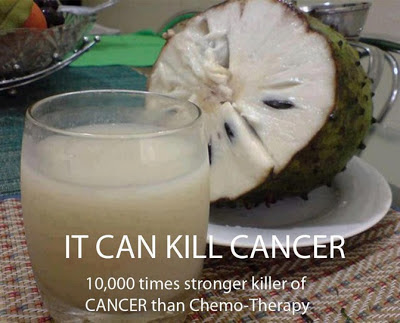 A study published in the Journal of Natural Products, following a recent study conducted at Catholic University of South Korea stated that one chemical in Graviola was found to selectively kill colon cancer cells at “10,000 times the potency of (the commonly used chemotherapy drug) Adriamycin…”

Research shows that with extracts from this miraculous tree it now may be possible to:
* Attack cancer safely and effectively with an all-natural therapy that does not cause extreme nausea, weight loss and hair loss
* Protect your immune system and avoid deadly infections
* Feel stronger and healthier throughout the course of the treatment
* Boost your energy and improve your outlook on life

The source of this information is just as stunning: It comes from one of America's largest drug manufacturers, the fruit of over 20 laboratory tests conducted since the 1970?s! What those tests revealed was nothing short of mind numbing… Extracts from the tree were shown to:

* Effectively target and kill malignant cells in 12 types of cancer, including colon, breast, prostate, lung and pancreatic cancer.
* The tree compounds proved to be up to 10,000 times stronger in slowing the growth of cancer cells than Adriamycin, a commonly used chemotherapeutic drug!
* What's more, unlike chemotherapy, the compound extracted from the Graviola tree selectivelyhunts down and kills only cancer cells. It does not harm healthy cells!

Why are we not aware of this? It's because some big corporation want to make back their money spent on years of research by trying to make a synthetic version of it for sale.

The amazing anti-cancer properties of the Graviola tree have been extensively researched–so why haven't you heard anything about it? If Graviola extract is as half as promising as it appears to be–why doesn't every single oncologist at every major hospital insist on using it on all his or her patients?

The spine-chilling answer illustrates just how easily our health–and for many, our very lives(!)–are controlled by money and power.

Graviola–the plant that worked too well. One of America's biggest billion-dollar drug makers began a search for a cancer cure and their research centered on Graviola, a legendary healing tree from the Amazon Rainforest. Various parts of the Graviola tree–including the bark, leaves, roots, fruit and fruit-seeds–have been used for centuries by medicine men and native Indians in South America to treat heart disease, asthma, liver problems and arthritis. Going on very little documented scientific evidence, the company poured money and resources into testing the tree's anti-cancerous properties–and were shocked by the results. Graviola proved itself to be a cancer-killing dynamo.

But that's where the Graviola story nearly ended.

The company had one huge problem with the Graviola tree–it's completely natural, and so, under federal law, not patentable. There's no way to make serious profits from it.

It turns out the drug company invested nearly seven years trying to synthesize two of the Graviola tree's most powerful anti-cancer ingredients. If they could isolate and produce man-made clones of what makes the Graviola so potent, they'd be able to patent it and make their money back. Alas, they hit a brick wall. The original simply could not be replicated. There was no way the company could protect its profits–or even make back the millions it poured into research.

As the dream of huge profits evaporated, their testing on Graviola came to a screeching halt. Even worse, the company shelved the entire project and chose not to publish the findings of its research!

Luckily, however, there was one scientist from the Graviola research team whose conscience wouldn't let him see such atrocity committed. Risking his career, he contacted a company that's dedicated to harvesting medical plants from the Amazon Rainforest and blew the whistle.

The full Graviola Story–including where you can get it and how to use it–is included in Beyond Chemotherapy: New Cancer Killers, Safe as Mother's Milk, a Health Sciences Institute FREE special bonus report on natural substances that will effectively revolutionize the fight against cancer. This crucial report (along with five more FREE reports) is yours ABSOLUTELY FREE with a new membership to the Health Sciences Institute. It's just one example of how absolutely vital each report from the Institute can be to your life and those of your loved ones.

From breakthrough cancer and heart research and revolutionary Amazon Rainforest herbology to world-leading anti-aging research and nutritional medicine, every monthly Health Sciences Institute Member's Alert puts in your hands today cures the rest of America –including your own doctor (!)– is likely to find out only ten years from now.

Thank you so much for sharing this incredible post!

Graviola is one of the ingredients in Black Salve, which has proven to be very effective in successfully treating various forms of skin cancers and has even completely removed cancerous breast tumours!

There are now plenty of incredible testimonials on youtube, regarding Black Salve, including videos from long-time raw vegan, Paul Nison, who successfully removed a mole and another growth from his face and also, more recently, a large tumour from his back, without surgery, just by applying Black Salve.

The truth, although deliberately suppressed, is out there!

Love, light and healthy eating to everyone...

I was just in Hawaii eating a bunch of Soursop, someone told me this exact thing, it's true!

Eat enough bananas or water and youll cure most cancer too. Dying was supposed to be hard :D

I like the idea of what you're both saying but what do you think about this, from WIkipedia?

"The compound annonacin contained in the seeds of soursop is a neurotoxin and it seems to be the cause of a neurodegenerative disease. The only group of people known to be affected live on the Caribbean island of Guadeloupe and the problem presumably occurs with the excessive consumption of plants containing annonacin. The disorder is a so-called tauopathy associated with a pathologic accumulation of tau protein in the brain. Experimental results demonstrated for the first time that the plant neurotoxin annonacin is responsible for this accumulation."

I find the idea of a fruit being neurotoxic strange but my mind is open.

Annonacin in soursop has been confimed as a neurotoxin. Regular consumption seems be the cause of brain lesions responsible for parkinson's-like symptoms in elderly people in Guadeloupe, Guam, New Caledonia etc. See my post here.

So far these findings are restricted to a few isolated populations, so it could be that there are particular risk factors relating to ethnicity and/or lifestyle; however there's little reason to assume this is the case.

Annonacin and other similar acetogenins (which are the chemicals presumed to have an anti-cancer effect) are also present in cherimoya, pawpaw, custard apple etc. Soursop does seem to have the highest concentration though. You should definitely avoid the seeds from the entire family.

Thankyou very much Nathan. You're talking about the seeds, do you know if you can eat the fruit avoiding the seeds?

Sorry, just read your other post and you answered my question.

soursop is soooo yummy :D just had it last month in costa rica

I def will try some there Jenelle!